What a shock greeted the readers of this week’s Market Harborough Advertiser. Sadly it wasn’t news of the end of the war and happily it wasn’t a report of many local soldiers being killed in action.

The surprise was a front page almost half-filled with photographs, a complete transformation from the usual collection of ‘display’ advertisements. Even the national newspapers of the early 20th century shunned the idea of including editorial on their front page.

These photographs, of the town’s leading employer the Harborough Rubber Company (still a dominant fixture in today’s town with its Riverside Industrial Estate factory), not only break the publishing mould but touch every single reader of the Advertiser, who either work at the factory, know someone who works there, or at least have passed there and know the scenes.

This is classic local newspaper publishing, finding something unique about something that is familiar.

In journalistic terms this is called a ‘picture story’ and therefore has only a few words to support what the reader can see with their own eyes.

There is no reference to the unusual nature of the article and the story says very simply: “Our illustrations depict a busy scene at the Harborough Rubber Company’s well-known works at Market Harborough. A crowd of drays were being loaded with heavy motor tyres which were being sent away for use on Army wagons, etc.”

The story goes on to add a remarkable figure that will come as a bit of a surprise to many readers, and also be learned with some pride in the connection they have as individuals to the important work going on in their town. “Some of the tyres weighed considerably over a hundredweight each.”

What is also of keen interest – and relief – to many readers is the contribution the work is making to the local economy which has of course been hit by so many young men being taken away to the Frontline.

“The making of motor tyres in a branch of the Company’s business which has developed very remarkably and has now become extensive as is evidenced by the event which forms the subject of our pictures.”

The picture story concludes with a hint at the company’s other contemporary name – Dainite. “The Rubber Works are known as the ‘Day and Night Mills’ and for some time they have been working night and day, seven days a week on double shifts, on Government works.”

There is plenty of other news inside the eight-page paper this week, sadly among the reports of local clubs, courts and councils are more stories about Harborough soldiers killed or wounded in action. 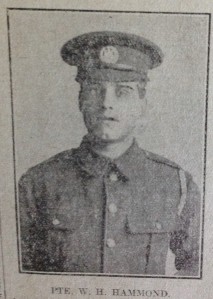 The “Mobbs’ Corps”, part of the 7th Northants Regiment and including many local men, ‘played a prominent part in fierce fighting’ around the infamous town of Ypres last week.

“In such heavy fighting causalities are bound to be heavy and we are sorry to record that a number of local members of the Corps have been wounded including Captain Guy Paget, Captain Mansfield, Private W H Hammond, Signaller A E Justice and Private E J Granger.”

Captain Paget, the prospective candidate for the Mid-Northants Division, has damaged ribs and his brother-in-law Captain Mansfield is slightly wounded.

Private Hammond of Newcombe Street, who used to work at Ellis and Everard, was slightly wounded. In a letter to his sister he says: “We shoved the Germans back some distance and then, when we were occupying the last trench they had left, we were ordered to charge. Supports arrived for the second charge, when I was hit in the head with a piece of shrapnel.”

Signaller Justice of Bath Street, who was a clerk with Eady and Dulley, says in a letter to his mother that his left hand is shattered.

“I was very lucky I didn’t get it a lot worse for a German bullet hit the ammunition in my bandolier and exploded ten rounds of it, all of which struck my hand.

“I had a walk of three or four miles to do before I got to a dressing station so I consequently lost a lot of blood.”

Private Granger, also of Bath Street, was hit by a bullet in the left leg and has three pieces of shrapnel in his back a wound to his hand.

And the Territorials’ commander, Major H Jeffries has been shot in the head. The Advertiser reports: “Quite a gloom was cast over the town when it became known that Major Jeffries, Commanded of the Market Harborough (“E” Company) Territorials had been killed in action.”

In a letter to his father, the Rev F Williams and vicar of St Matthews in Leicester, the Major’s Second Lieutenant writes: “He was a topping chap. He hated the war but he never tried to get out of things and he often went into considerable danger to be with the men, when he might very well have out of it as a Company Commander.”

Check out this week’s Harborough Mail for current news from the Market Harborough area.