May 14, 1918 – Harborough soldier killed in action after recently getting married

A newly-wed Harborough soldier is the town’s latest fatal casualty of the Great War according to the May 14, 1918, edition of the Market Harborough Advertiser.

Not only is the young bride of Lance Corporal Arthur Isaac left widowed but his parents of St Mary’s Road have now lost a second son to the fighting.

The Advertiser also reports that 22-year-old Private Sydney Webster, son of the landlord of the Cock Inn, Market Harborough, has died in a London hospital nearly a year after being wounded in action.

The report says: “He had been in hospital ever since and he bore his trying illness with great fortitude but despite the best medical skill he passed away on Thursday.”

Webster, who had previously worked at Caxton Type Works in Harborough, was given a military funeral at the town’s cemetery.

There is also brief news of Corporal Ralph Starbuck, 25, who has also left a widow at their home in Rose Cottage, Marston Trussell. He also died of wounds received in action.

These stories claim very little space in this week’s Advertiser, which is reduced to four pages instead of its usual six because of paper rationing.

There is plenty of space, however, for the more mundane things in life – in fact a glance at the columns of the Advertiser demonstrates quite clearly that life goes despite the war. Perhaps it’s not quite business as usual but after nearly four long years of fighting the shop owners of the town are obviously staying afloat. 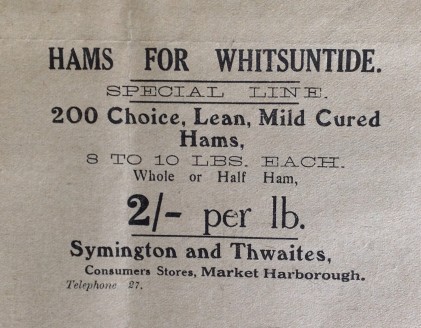 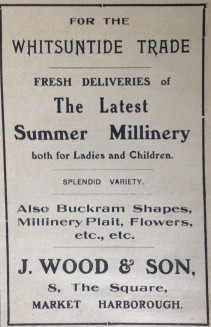 J Wood and Son at 8 The Square has ‘fresh deliveries of the latest summer millinery’ available for both ladies and children – perfect for the ‘Whitsuntide trade’.

Symington and Thwaites are also vying for the Whitsuntide trade with their choice of ‘lean, mild cured hams’. Presumably it was possible to put in an order by one of the new-fangled instruments called telephones. Mr S and Mr T were clearly proud enough to show off their ownership of a telephone because they note it in their advertisement. Although it doesn’t look like there will be many callers as their telephone number is simply 27!!

There is more evidence of life carrying on – albeit under the shadow of the war – with a report of a charity football match between Little Bowden Albion and the Remount Depot. The report says: “The match provided a draw’ (the final result) in more ways than one, for it was a beautiful day and the spectators testified their appreciation of the afternoon’s sport by contributing £6 2s 3d to a collection for the excellent Market Harborough Cottage Hospital.”

And there was a ‘successful whist drive’ held at Dingley Hall in aid of the Market Harborough War Hospital Supply Depot.  There were an incredible 212 players and they raised the staggering sum of £21. Perhaps it’s not as surprising at first sight that this is one of the most prominent stories on the page and lists all the winners and helpers – including the person who loaned the cards.