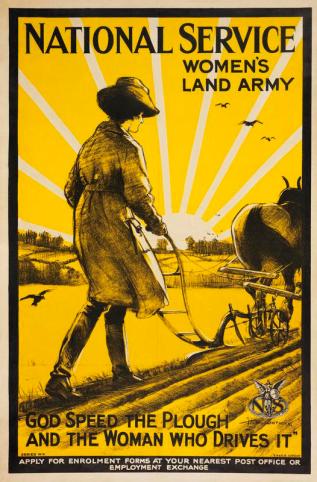 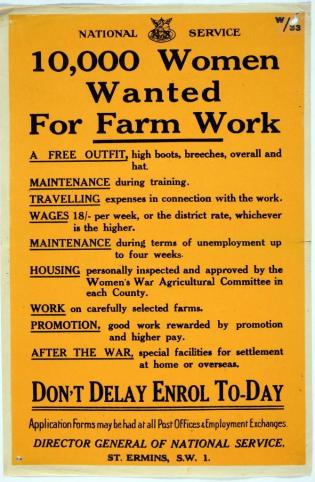 Thousands of men from the Harborough area have picked up a rifle and are fighting for King and country – now it is the time of the district’s women to pick up a pitchfork.

The Square in Harborough’s town centre ‘presented an animated scene when a recruiting meeting for the Women’s Land Army’ brought out  ‘a number of Land Girls who were present and actively engaged as recruiters’ says a report in the July 30, 1918, edition of the Market Harborough Advertiser .

The Land Girls – women who gave up their domestic life to take up the jobs of farming men who had gone off to war – are more commonly associated with World War Two.

But in fact the Land Girls were originally started in 1917 to help meet the food shortages caused by German U-boat blockades of imported food and a lack of men to farm at home.

The Gov.uk website says: “Repeated appeals to women of all classes were issued throughout 1917, and considerable publicity campaigns generated.

“Tapping into military propaganda that sought to enlist soldiers, posters, leaflets and cinematic clips were designed to capture women’s sense of patriotism and self-sacrifice.

“Condemning the U-Boat Scourge for destroying the nation’s imported food supplies, the Government appealed to strong and suitable women over the age of 18 to come to the country’s assistance, and help provide our own food supplies in much greater quantity than ever before.”

There were perks which of course were highlighted by the poster campaign – 20 shillings a week – and of course the ‘gruelling work’ was portrayed in ‘an idealised, romanticised light’.

Speeches made in Market Harborough focused on the patriotic need to do your bit. A message was read from the Minister of Food Mr J R Clynes who said: “It is most essential that, in view of the submarine menace which is still threatening the food of this country, every possible effort should be made to gather in the forthcoming harvest.”

Only ‘several recruits were enrolled’ from Market Harborough but they were part of a huge effort that resulted in more than 20,000 women working on farms around the country.

For those who stayed at home they were spoilt for choice at the cinemas in Market Harborough and Leicester who all take large promotions every week in the Advertiser.

One film catches the eye this week: Rasputin – the Power Behind the Throne. Although the County Electric Palace on The Square has obviously paid hard cash for the ad, the paper is happy to give over some of the editorial space in support.

The ‘news story’ appears to be a little on the biased side: “Rasputin is a name which has become synonymous with the blackest treachery and every kind of evil influence.

“This picture, which is one of the most remarkable of the day, has for its basis sound historical fact with sensational and thrilling realism.”

There is literally not a single mention of a local men fighting abroad in this edition of the paper – but there is a story about the weather in June provided by J Knight Law of Marston Trussell.

As we swelter through yet another week of unseasonably hot 2018 weather, the picture was very different one hundred years ago. It seems the maximum temperature reached was 650F – that’s just 180C. There were even four nights of FROST!