There is a hint of triumphalism in an editorial headlined The Climax of the War in the October 8, 1918, edition of the Market Harborough Advertiser.

It begins: “The war has now, we may venture to state, reached its climax. Indeed there is every sign that the supreme crisis is past in the brilliant series of events which have unfolded themselves with such bewildering rapidity in the fortnight which has just elapsed.

“As offensive after offensive has been launched with such astonishing success in every theatre of war the profound genius of allied strategy has revealed itself and there are few indeed who would now be found to engage in niggling criticism of the conduct of operations.”

The editorial goes on to tick off the victories:

And with hindsight we know the editorial writer is absolutely right and the bells of peace will be ringing in just 34 days.

As 21st century readers, we also equally know that the editorial is right in saying ‘this is not the moment for the Allies to slack off’.

The article quotes the Prime Minister David Lloyd George who says: “It is not enough to reach the heights where we can see the plains of victory at our feet. We must occupy them. This will cost much patient effort but it is worth it.”

With chilling prescience Lloyd George says: “Partial victory would be a suspended disaster. It merely adjourns the decision to a dark future, it would secure nothing.”

And, in fact, we now know that although there is an ‘unconditional’ surrender of sorts on November 11, the messed up settlement at the Treaty of Versailles in the following year and the birth of the toothless League of Nations in 1920 is exactly what Lloyd George feared. And, of course, a mere two decades later Europe – and then the rest of the world – was plunged into yet another global conflagration.

The publication of the editorial column under the Advertiser masthead is a first for the newspaper and is probably deliberately introduced by the new editor Mr Geo Brookes, who also introduces himself in a sidebar story describing his parting gift from colleagues at the Birmingham Gazette where he had worked for two years.  He replaces Mr W N Gosnell as the Advertiser’s editor but there is no other mention of his departure. 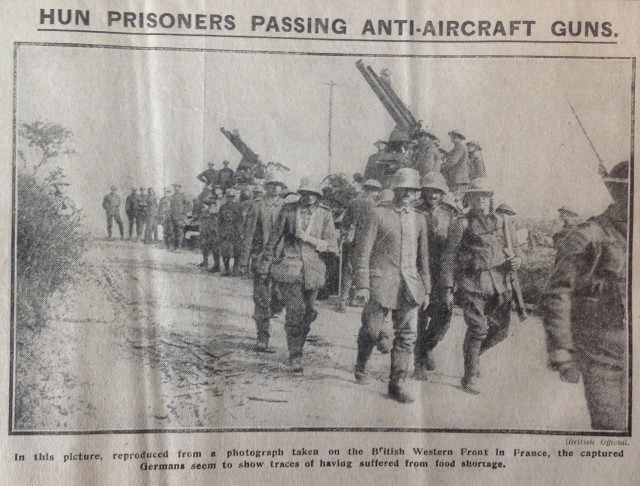 Brookes, however, does not tinker with the now established format of including the Press Bureau-supplied War Supplement which includes a range of stories and photographs like the one above, once again reinforcing the editorial that Germany forces are on the knees.